The Rebirth System was added in Ver.3.4.0. Through Rebirth you can strengthen units by feeding them units from the same line of evolution or by using the Limit Over option under the Unit Points shop. 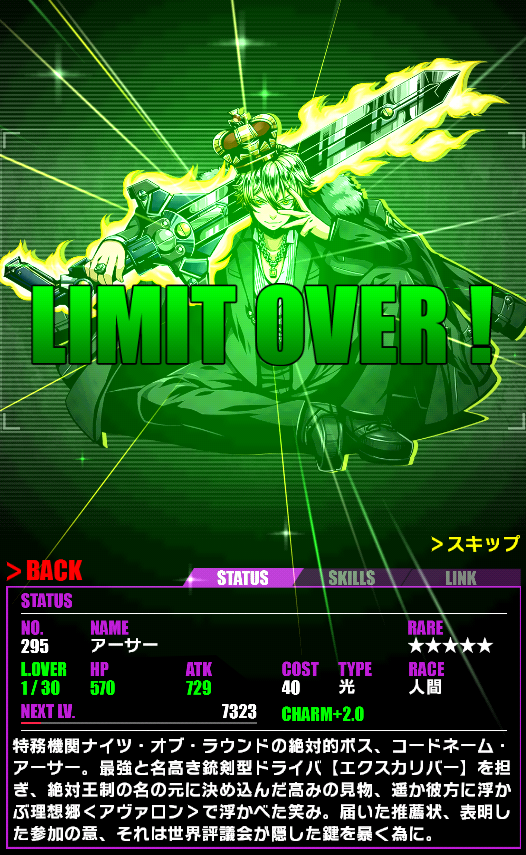 The number of times you do this varies per units:

Making an unit rebirth will increase its stats. The amount of stats varies per unit:

The usual amount for all units at max L.OVER is around ~300HP and ~100ATK, but series like the Heroes from friend scratch, the Trons, the Resist Dragons, the Fairy Maidens and the Executioners can gain higher stats than other units.

Increasing the L.OVER level will also increase an unit's bonus cost: this cost will only affect the amount of stats it will give as a Link unit (since the higher the Link unit's cost is, the higher the stats it gives to the Base unit will be). It has no effect anywhere else.

Increasing an unit's L.OVER level will also increase its CHARM: the maximum amount of Charm depends per unit. The higher the team's Charm is, the higher the chance of getting bonus items per floor at the end of a quest will be.

These bonus items can be Coins, Tickets or Units (even units that can't drop in the quest cleared):

Retrieved from "https://divine-gate.fandom.com/wiki/Rebirth_System?oldid=38984"
Community content is available under CC-BY-SA unless otherwise noted.