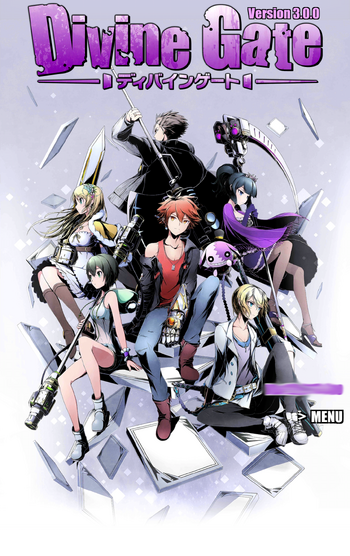 The image will display the current title screen that the game has.
APK Download - (Mirror #1Mirror #2)

Welcome to the title screen. Simply touch the screen and you'll patch or head straight in if you're all updated.

Touch anywhere in the purple rectangle at the bottom to head to the official game site's new/updates page. It will be the mobile version.

Click here to view it on your desktop. (Still in mobile version)

Playing from a non Japanese region

If you are in a region that doesn't show the game on the Google Play or iTunes store, follow these steps.

Getting the game on Android

Getting the game on iOS

Q: The game won't start/automatically closes!
A: There are several steps you can take.

Q: Can I play without updating?
A: No.

Q: Why are some images blurry?
A: You have the game set to "low/medium quality". In the main screen under your ID there will be an option called ">MENU". There select quality selection (クオリティ選択) and then high quality (クオリティ高).

Q: I installed the game, but I don't understand how to ___?
A: Read up all the articles under Game Information. It should teach you the basic mechanics of the game as well as give you some tips.

Retrieved from "https://divine-gate.fandom.com/wiki/Getting_Started?oldid=40731"
Community content is available under CC-BY-SA unless otherwise noted.